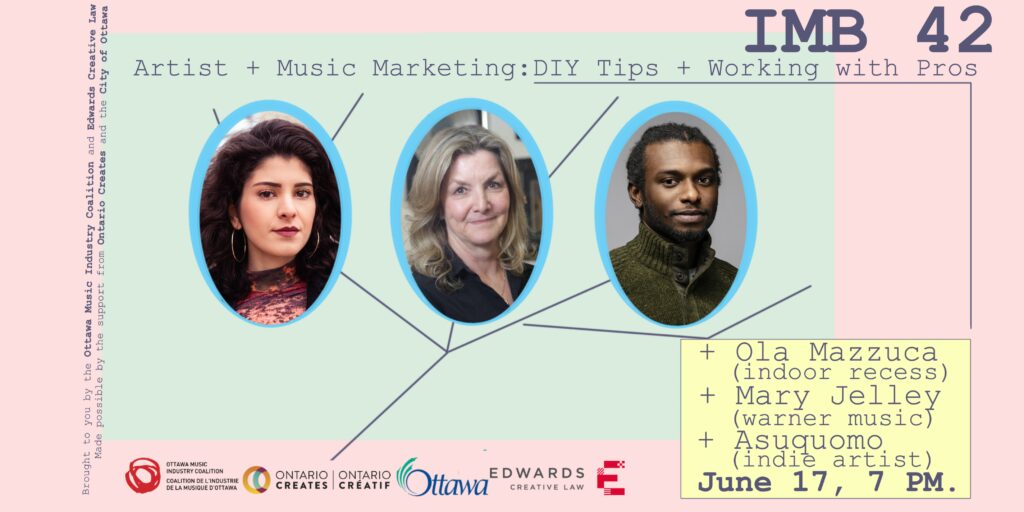 Join us for a talk about the best ways to promote music and artists, taking into account every budget and career level. Featuring Mary Jelley of Warner Music, Ola Mazzuca of Indoor Recess, and indie artist Asuquomo, this panel will be sharing info you will not want to miss! The Independent Music Business sessions are presented in partnership with Edwards Creative Law and are made possible by the support of Ontario Creates and the City of Ottawa. As always, this panel is free for all to attend.

MARY JELLEY: Mary Jelley is the Regional Manager for Warner Music Canada. Mary works with local, National and International recording artists signed to the label, playing a critical role in the development and success of many Canadian artists. Mary’s passion is to help develop careers. Mary is an active member of Canadian Academy of Recording Arts and Sciences (CARAS) and the Canadian Country Music Association (CCMA). Mary served as a board member with the not-for-profit, Ottawa chapter of Women in Communications and Technology (formerly known as CWC) from 2007 – 2012, holding the Chair position for her last two years. In 2011 she was awarded the Leadership Excellence Award.

OLA MAZZUCA: Music is Ola Mazzuca’s life vocation. Born and raised in Toronto, Canada, Ola launched her career over ten years ago as a multimedia journalist deep within the moshpits of the city’s metal community. Since then, her journey into music has expanded tenfold.
Ola’s work and personal experience span a wide spectrum ranging from Features Editor of a magazine to Project Coordinator for the development of programs supporting accessibility and inclusion within art galleries and museums, to hosting and producing several podcast series supporting community initiatives.

Blending her passion for the arts and community, she is a Senior Publicist at Toronto-based public relations and artist management company, Indoor Recess, working with artists from across Canada and beyond, fostering interest in their music and personal stories.

In 2019, Asuquomo released an extended-play project, DIOBU, which was financially supported by the Ontario Arts Council. Pitchfork Magazine described the EP as a project which “explores themes of family, home, and the immigrant experience in his adopted city,” in their 20 Great Records You May Have Missed: Summer 2020 seasonal roundup.

In October 2020, Asuquomo released the music video for his single, “Don’t Be Scared”, which was funded by the City of Ottawa. Following the release, American Songwriter Magazine described the visuals as “spastic and piercing, aggressive and personal, intriguing and entrancing” in their Five to Discover: Acts You Need to Know, with Asuquomo being the only Canadian act spotlighted. Awarded the SAW Prize for New Works 2021, Asuquomo has invested prize funds into his debut full-length album, set for release early 2022 – stay tuned!

Vanessa Vakharia is a multi-talented Canadian woman, who in her own words is “Basically the Lady Gaga of math, but also in an actual rock...