Neighbouring Rights in Canada – Being a Musician is a Business 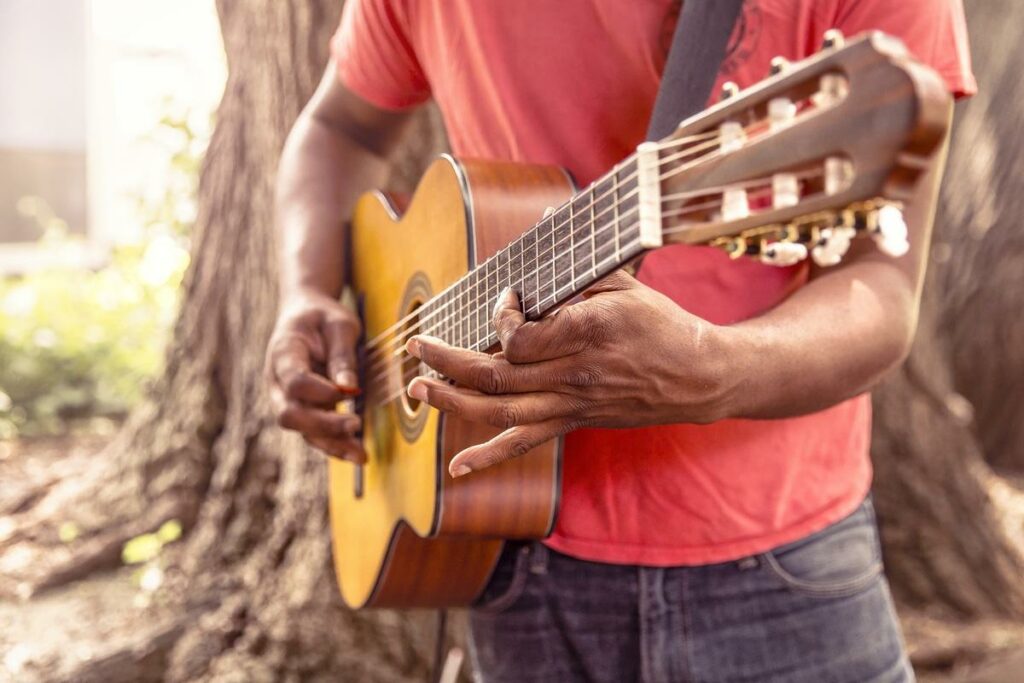 Neighbouring Rights in Canada – let’s dive in! I challenge anyone not living in a cabin in the woods to make it through a day without being exposed to recorded music – it is all around us. The owners of establishments intentionally use music to enhance your interaction with their business. Whether it’s chill music for drinks at a wine bar, or EDM blasted at you during the masochism that is a spin class (think pre and post-covid), recorded music is an integral part of the experience. As there is obvious value to businesses in playing recorded music, it only seems fair that rightsholders in recorded music should be compensated.

Neighbouring Rights are the non-exclusive rights of sound recording “makers” (typically, labels) and performers (whoever performs on the recording – vocalists and musicians) to receive royalties for the broadcast and public performance of their recordings. Canada’s Copyright Act refers to the payment of these royalties as “equitable remuneration” which is payable to makers of and performers on a 50/50 basis, i.e. performers would be paid their 50% share without a record label as an intermediary.

Note that the right is not an exclusive right in the way that a master use or synchronization license is, and there is no prohibition in the neighbouring rights section of the Copyright Act against a user effecting the public performance of a sound recording. As such, broadcasters or music services that play sound recordings have something akin to a compulsory license to do so – meaning that they don’t need to ask for permission, but do need to pay for those uses. The neighbouring right is a remunerative right (i.e. the right to get paid for spins). Canada and most other countries in the world have a neighbouring rights regime to compensate performers and makers.

Radio broadcasters in most countries including Canada are also required to pay neighbouring rights royalties for spins of eligible recordings. Notably, the US is one of a handful of countries that does not have a neighbouring rights regime for radio broadcasters. But US webcasters like Pandora and satellite radio broadcasters are required to pay digital performance royalties, which are administered by SoundExchange, which I will cover more deeply in a subsequent post. The royalty rates are set through tariff proceedings at the Copyright Board of Canada. Establishments (bars, gyms, etc.) are required to secure (and pay for) public performance licenses through one of a number of collectives that represent sound recording owners and performers. In order for a sound recording to qualify for equitable remuneration, the following requirements must generally be met:

1. In the case of an individual:

2. In the case of a corporation:

a. the maker of the recording must have had its headquarters in Canada or a Rome Convention country or a WPPT country at the date of the first fixation of the performance.

Note that the sound recording must be protected by copyright, so not in the public domain.

Neighbouring Rights in Canada: Who Collects and Distributes Them?

Neighbouring rights royalties in Canada are collected from sound recording users by Re:Sound, a collective created under the provisions of the Copyright Act, Re:Sound does this behalf of its member organizations, which are as follows: 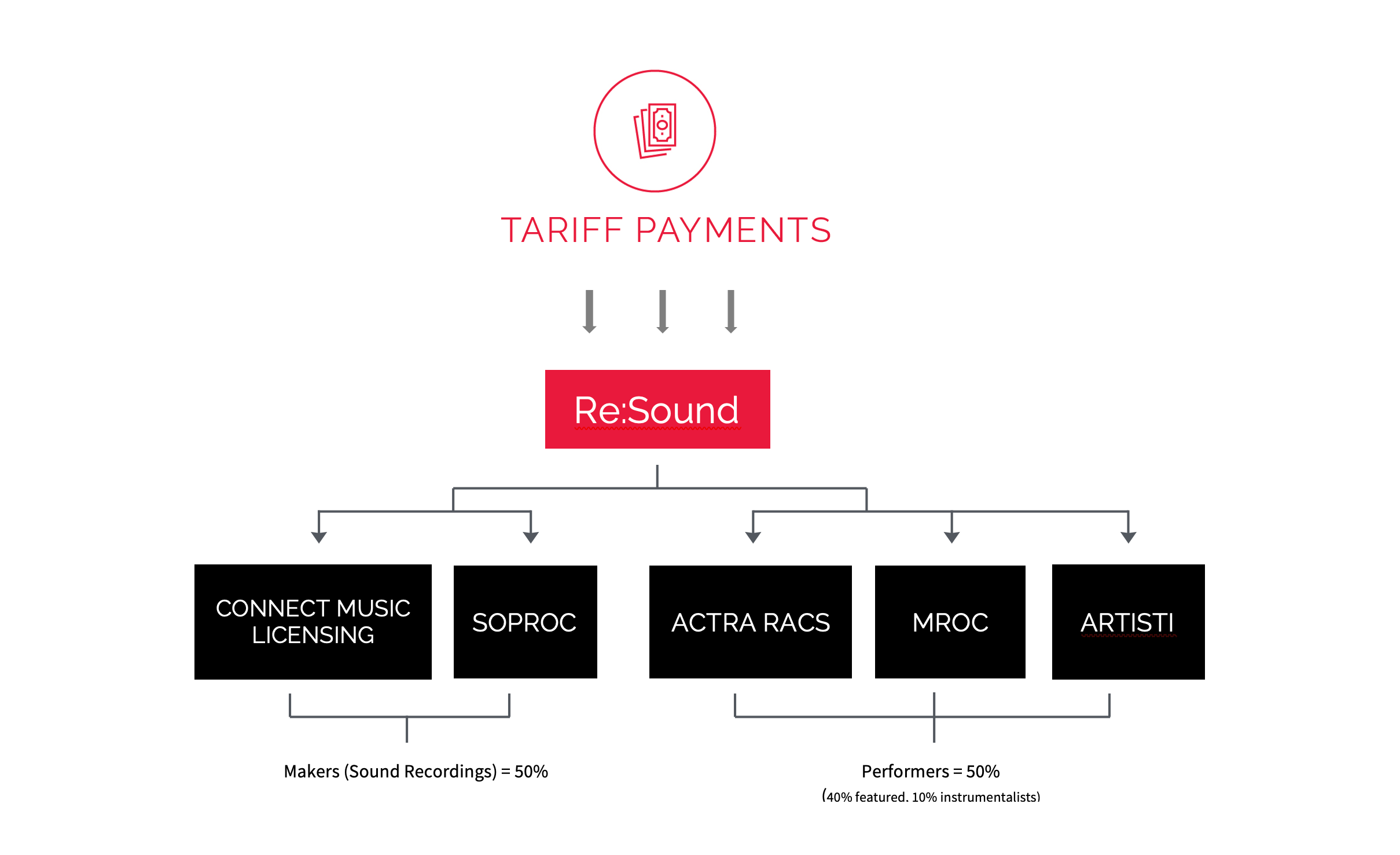 Distinguished from PROs for Publishing:

Re:Sound collects neighbouring rights royalties where SOCAN collects and distributes royalties on behalf of songwriters and music publishers. In the US, ASCAP and BMI perform a similar function as SOCAN in Canada.

As mentioned, the regime was set up to pay stakeholders via collectives that are set up in accordance with Canada’s Copyright Act. The system purposely separates the maker vs. the performance shares. Performer collectives (ACTRA RACS, MROC and Artisti) receive distributions of royalties directly from Re:Sound, and pay their performer members directly to avoid having traditional record labels act as intermediaries. Like most things in the music business, practices and concepts have changed due to technology and evolving business practices, and the distinction between “maker” and artist is not as clear-cut. It is becoming more common for artists to potentially be “makers” of sound recordings, and so the deals we see are reflecting this. But traditionally, the following would apply:

• In record deals and licensing deals, the record label would typically collect and retain 100% of maker’s share of neighbouring rights royalties. License deals between record labels (e.g. for a territory) is a possible exception

• Performer’s share collected and retained by performers (falls outside record/licensing deal) – the key is what percentage will be provided to each of the featured and non-featured performers.

Neighbouring rights royalties being paid to stakeholders in Canada are declining as are ad revenues of traditional radio broadcasters. However, the payouts on a Canadian hit for terrestrial radio can still be substantial, especially on a medium that continues to have CANCON requirements. And as discussed, performance royalties are payable pursuant to tariffs for semi or non-interactive streaming services, and establishments that play recorded music. It is also a low-cost, relatively passive form of income for a rightsholder. As the right is not an exclusive right and users have the right to publicly perform sound recordings, there isn’t any negotiating the terms of use of the recording. Rather, the tariff dictates what is paid. The caveat here is that some effort is required by the rightsholder to ensure they qualify for payment and the payment is collected. Again, neighbouring rights are rights of remuneration i.e. payment, and stakeholders and their repertoire have to be registered with an appropriate collection organization in Canada or an international organization that collects from Re:Sound. If they are not, they simply don’t get paid.

If you have any questions or need any guidance with neighbouring rights royalties, please give us a call, we are happy to help!

—
Check out our related Blog Posts: